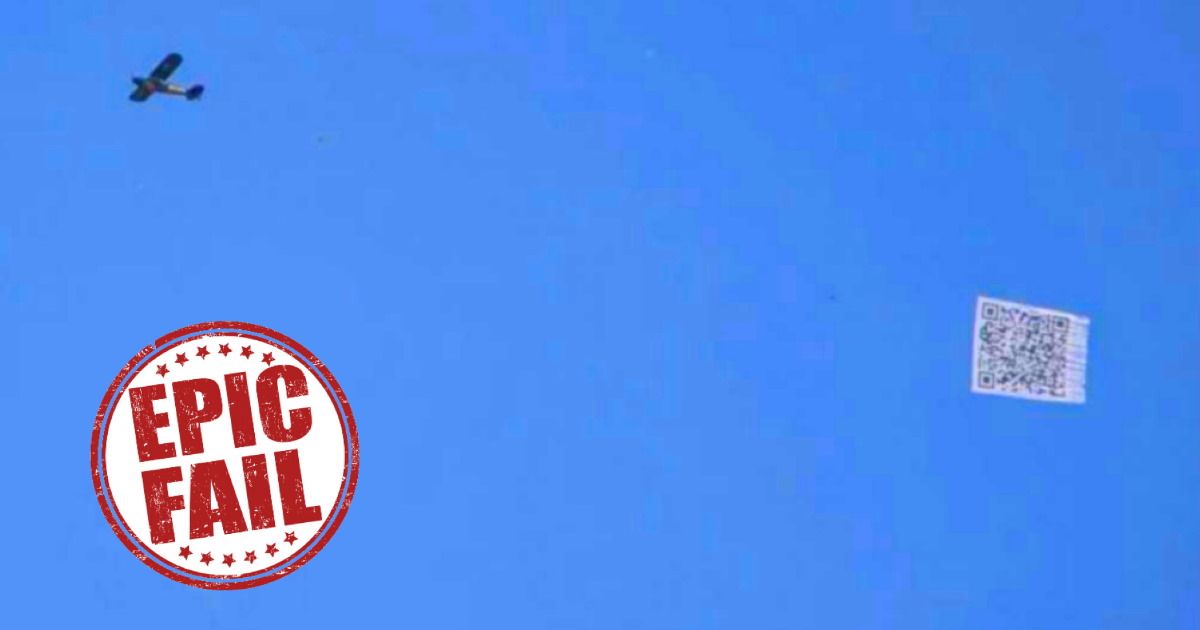 Following our QR Code guide will help you to create successful marketing campaigns. However, before you are ready for your first campaign, we also want to give you a clue on how not to use QR Codes and avoid wasting your budget on senseless activities.

A user will not be able to scan a QR Code that is moving or is too far away to scan. For example, a QR Code pulled by an airplane is a completely loss of fuel and money for printing the poster with the QR Code on it. There is no way that a QR Code Reader can catch the QR Code like shown in the image above from a person on the ground. We also recommend that you do not print QR Codes on other moving objects such as cars, buses, trucks, trams, etc. Nobody can scan a QR Code when the object is moving. In addition, this also represents a danger to traffic if the person scanning is distracted from the action.

Use QR Code tattoos at your own risk

QR Codes on the skin work poorly or not at all, as the code becomes illegible when the skin is stretched and the QR Code is distorted too much by other unevenness such as hair, tendons or bones.

Wearing a QR Code as a hairstyle is a nice gag, but it does not work. When you generate a QR Code use a medium that is not alive ;)

Note especially that when a QR Code is affixed behind a glass, reflections may occur, so that the camera can have problems when decoding the QR Code. Print the QR Code beforehand, mount the code at the place where it will be in production and do scanning tests to ensure readability.

Do not use materials that crease easily

The QR code printed on the product packaging can be difficult to read if the packaging material is slightly wrinkled or uneven. So, do not just print out the QR code beforehand to test, but actually place the QR Code on the material from where he will be scanned later and check the readability.

Using a thick marker to produce your QR Codes and Datamatrix manually may not be the best idea either (thank you Patrick).

We recommend a minimum size of 2 x 2 cm for a QR Code. However, you must consider the scanning distance and the number of charactars encoded in the QR Code.