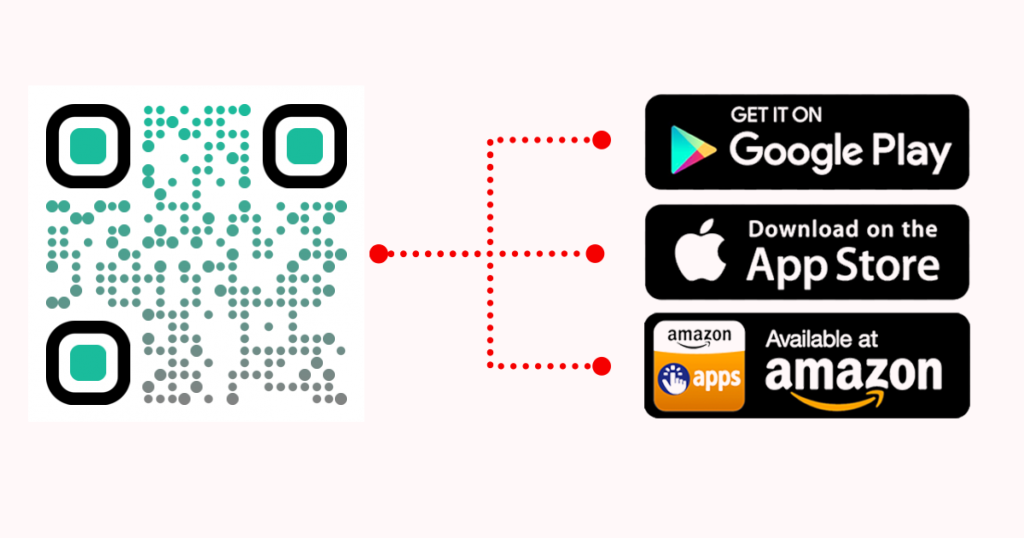 Promote your App in your App Stores with a single App QR Code. If a user scans the QR Code, he will be redirected to the right App-Store where he can install your App directly on his Smartphone.

Use a single App QR Code for Google Play, Windows Phone Store, Amazon Store or the iOS App Store, instead of creating a QR Code for each store.

All App Stores in one QR Code

With a country-dependent redirect, you can decide in which country to which app or app store to forward.

If you deploy an App the App-Store might restricts the App to specific countries or the App-Store is blocked in one country. For example, there is no Google Play Store in China yet. To overcome this problem, you can create geo-targeted QR Codes and set an optional App-Store link for each country.

So if a user scans your QR Code with an Android device in China, he will be redirect to a different App-Store than to the Google Play Store. A user’s country of origin is determined using his IP address.

You can also define language-dependent redirects depending on the language set in the user's browser settings. For example, if a visitor has their default browser language set to English, you can redirect them to the English-language app once they scan the QR Code.

When you create Google Ads you can set campaign parameters that tell you from which source visitors are coming on your website and see how many of them purchased an item or subscribed to your newsletter.

When using App QR Codes wouldn’t it be interesting to get the conversion rate of QR Code scans versus the number of App installations?

In other words how many people that scanned a App QR Code where really installing the App?

If you add a referer in the links to the app stores you can get this conversion rate like shown below.

When you set the URL to link to your App in the Google Play Store add the parameters utm_source, utm_medium, utm_term, utm_content and utm_campaign

All details can be found here under Google Developer Guides.

When linking to your App in the App Store, your campaign must include your provider token and a campaign token e.g.

Campaigns only display in App Analytics after more than a day has passed since campaign launch and at least five App Units are attributed to the campaign.

Learn more about tracking app campaigns with Apple under the developer guides.

Some other tips to promote your App​